The following review of the DCC Specialties DCC circuit breakers was published in the August 2007 issue of Model Railroader.

Though you'd probably not think of using the word "cool" to describe a circuit breaker, the term definitely applies to the new PSX series of Power Shield Digital Command Control circuit breakers from DCC Specialties. The PSX models have a wealth of new programmable features, such as occupancy detection and adjustable trip current, making them much more than simple circuit breakers. And, with a feature called Adaptive Load Reset, the PSX breaker can tell the difference between a short circuit and power-hungry sound decoder capacitors, which should be a welcomed relief for many sound-frustrated model railroaders.

For those already familiar with earlier versions of the Power Shield breakers, the PSX series has the same, reliable operating features that protect model railroad equipment and wiring from damage during a short circuit, including fast-acting, solid-state electronics. The Power Shields are available in 1, 2, 3, and 4 circuit-breaker models, allowing you to divide the output of a single booster into independent power districts.

The advantage of using power districts is that should a short circuit occur in one district, it will trip only that district's breaker. This way the rest of the districts on the layout continue to function without interruption.

Our sample unit from DCC Specialties was a single-breaker PSX-1. To test it, I installed the breaker on one of our HO scale project railroads, which is powered by a Model Rectifier Corp. Prodigy Advance DCC system. I began my test with the quick-start instructions (requiring no programming), included in the instruction booklet.

The Power Shield's circuit board is wired between the DCC system's booster and the track bus, and the PSX-1 includes screw terminals for easy connections. There is also an extra pair of terminals for linking the booster input wires to addi-tional PSX breakers, should you decide to add extra breaker-protected power districts later. Once I'd connected the breaker, I powered up the DCC system and checked that the correct operation light-emitting diodes (LEDs) were lit. Getting started was that easy.

Next I tried out the Adaptive Load Reset feature. A PSX circuit breaker can determine if an overload is a real short circuit or due to the in-rush current needed to charge the capacitors found in sound-equipped locomotives.

I tested this feature with 10 sound-equipped engines (most with QSI decoders) all on the same power district. Once everything was functioning, I short-circuited the track with a screwdriver and then waited to see if the PSX would bring the track power back on line. Every time I conducted the test, the PSX properly reset the track power - all 10 sound decoders included.

The PSX-1 also offers a lot of great advanced features. Some of these, such as panel-mounted LED indicator lights and switches for resetting the breakers manually just involve connecting wires and components to the PSX-1.

There's some variation in procedures for programming the PSX-1's CVs with the various DCC systems on the market. To program the PSX-1 using MRC's Prodigy Advance system (what I used for the test), you must use ops mode programming. The instruction booklet provides information for working with other DCC systems.

Once you're ready to program, there are a number of features you can adjust - one of which is the trip current. As delivered from the factory, the PSX-1's trip current is 3.81 amps, though you can adjust it from 1.27 amps to 17.8 amps.

You can also program the PSX-1 to be used as an occupancy detector, using either track current or a photocell to detect the presence of a train. If wired with a photocell, the PSX-1 can be set to turn off track power when the train is detected, which is useful for staging yards.

DCC Specialties has taken its Power Shield circuit breakers and made them even better by adding features most modelers will want. 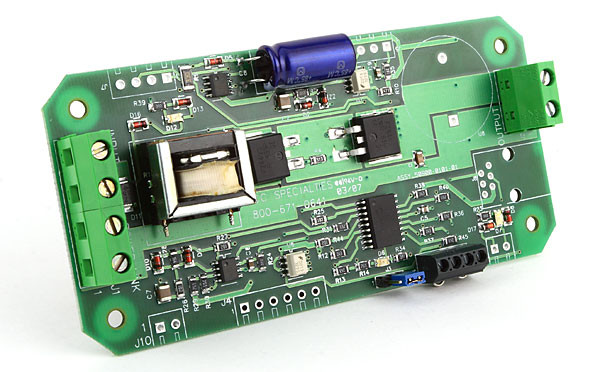