The evolution of hi-tech DCC decoders has outpaced the programming power most DCC Systems can provide!

Recommended for and compatible with Digitrax, Lenz, NCE and all other DCC Systems.

(You may leave the unit permanently installed for all programming.)
The PowerPax connects in series between the programming track output of your DCC System and your isolated Programming Track. Warning: Do not connect to DCC track output or use for Operations Mode (Mainline) programming or unit will be damaged.

Use 16-20 AWG wire to connect from your DCC System programming terminals to the left, input terminals of the PowerPax marked “From DCC Programming Terminals.” Any polarity is acceptable. Then connect the terminals on the right side of your PowerPax marked “To Programming Track” to your programming track. Any polarity is acceptable. Plug in the DC connector of the PowerPax power supply to connector J1 and the AC plug to a suitable 120 VAC outlet. Inspect all your connections!

WARNING: If the PowerPax output is energized inadvertently by contact to an external power source the unit will be DAMAGED. This can occur if a PowerPax assisted program track, even though isolated, makes connection to the mainline by dragging or running a loco across the gap ... the loco will transfer current from the mainline to the program track. You can prevent this by installing a dead unpowered section of track between the programming track and the mainline longer than your longest loco!
Do not use a DPDT switch unless it has Center OFF.

For BLI Switchers and Proto GP9: Tony's found that sometimes a 12 Ohm 1 Watt resistor (Digikey P12W-1BK-ND or equivalent) placed between the PowerPax and the programming track in series with one of the PowerPax output leads solves the problem. With the resistor installed, all three systems were able to read and write CV values correctly. This may be made as a permanent change to your programming track setup if it does not appear to affect the programming performance of other decoders.

Use the same programming track procedures for your DCC System as before. All features are the same including read-back if available. Read-back does not work for programming two decoders at once. For all Digitrax and Atlas Systems use the Direct Programming Mode!

The PowerPax status LED has to two indications: Led steady-on, all normal. Led blinking, short or overload detected, programming power terminated. This indicates either an internal decoder short, a wiring short or a device connected to the decoder drawing excessive current.

The PowerPax is reset simply by recycling the input power by unplugging and reconnecting J1. The status LED will return to steady on if the problem has been corrected. 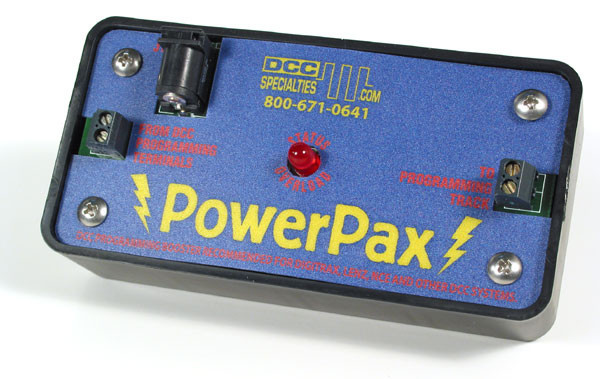